Understanding the Everglades food chain on a Florida airboat ride

Understanding the Everglades food chain on a Florida airboat ride

Remember that scene in Lion King when Mufusa was talking to Simba about the circle of life? There's actually some truth and science to what he was saying. While you won't find the term "circle of life" in a textbook, the scientific name for what Mufusa talked about is a food chain. They're a natural part of any ecosystem, all continously working together to create an environment to support a variety of plant and animal species.

In the Everglades, producers – mostly plants – produce energy and nutrients from the sun or through a chemical reaction. Then, herbivorous consumers – turtles, deer, and others – eat those plants for sustenance. In turn, the carnivores, most notably the alligator, hunt and eat those herbivores. The system sustains itself, and ecosystems thrive with their own systems of checks and balances. Airboat rides in Florida are among the best ways to witness this action for yourself!

However, when foreign species are introduced to this food chain, the balance of the system is thrown off. One of the biggest threats to the Everglades is theintroduction of pythons, which compete with native species for food. As a result of their unnatural introduction, a number of native species are quickly disappearing from the Everglades, including rabbits, raccoons, and even bobcats. 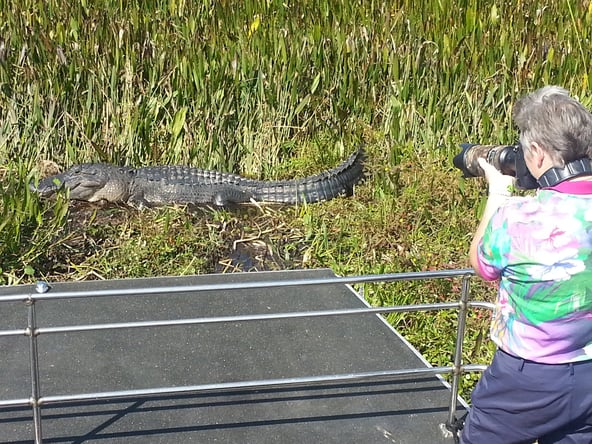 Conservationists and researchers in the Everglades area have found that monster snakes like Burmese pythons are even fighting with alligators for food – you've surely seen the photographic evidence in the news. While a number of efforts have been set forth to reduce the population of deadly snakes, their numbers have expanded to such an extent that they will be very difficult to eliminate completely.

The Everglades is a beautiful ecosystem, with a rich history and a vast variety of wildlife. Problems like the python population are only one reason why conservation and education are so important to help keep this ecosystem thriving. At Wild Florida, we'd love to show you how abundant Florida’s natural beauty can be with one of our airboat tours!