With Florida's population growing year after year, humans and alligators are running into each other more frequently. Because of these meet-ups (whether they're intentional or not), the state of Florida has created laws on how humans should handle, approach, and interact with alligators. In this blog, we go over three Florida alligator laws every Floridan should know.

"The [Florida Fish and Wildlife Commission] may by rule limit the number of participants engaged in the taking of alligators or their eggs from the wild. No person shall buy, sell, take, possess, transport, or import any American alligator, or any part thereof, or the nests or eggs of any American alligator..."

For the first half of the 20th century, alligator hunting and egg harvesting were unrestricted in Florida, which greatly depleted the species' numbers out in the wild. It wasn't until 1973 that alligators were listed as endangered under the Endangered Species Act. Now, currently listed as a species of special concern, without the proper license, you could face a felony for capturing and keeping an alligator or its eggs.

It's illegal to kill wild alligators

"Only persons under contract with the Commission as nuisance alligator trappers, or their agents and assistants, who have been approved by the executive director, or his designee, shall take, possess and kill nuisance alligators as authorized by permit."

Under Florida law, it’s a third-degree felony to kill or injure an alligator, so don’t try to poison or harm one to get rid of it. In Georgia, Alabama, Arkansas, Mississippi, Louisiana, South Carolina, and Texas, you are required to obtain a license or permit to kill wild alligators. In Florida, however, alligators can only be killed if deemed a nuisance by the Florida Fish and Wildlife Conservation Commission or by applying to the Statewide Alligator Harvest Program, where there are specific timeframes and areas where permit holders can hunt. 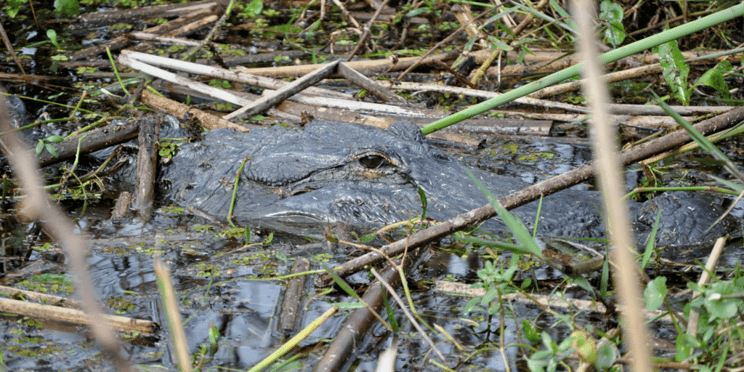 It's illegal to feed wildlife and freshwater fish

You may have fed wildlife, like ducks or fish, when strolling through the park or visiting recreational areas. And while it may be tempting to feed a wild alligator, it's also illegal. When you feed alligators, it causes the alligators to lose their natural fear of humans and to associate humans with food. Normally, alligators will avoid humans. But if an alligator has been fed by humans, they will be more likely to move toward humans and could potentially become aggressive.

While these laws might scare you, don't let wild alligators in Florida scare you! Alligators can be fascinating creatures to watch at a safe distance on land (or observe from an airboat ride)! If you'd like to learn more about these scaly creatures, make sure to visit our Gator and Wildlife Park where you can see them up close and learn more about them. Besides, from now through December 31st, 2017, we're offering free admission into our Gator and Wildlife Park, so what better time to visit than now?

The laws mentioned on this blog and more Florida alligator laws and citations can be found on the Florida Fish and Wildlife Conservation Commission's website.