If you asked Punxsutawney Phil what he would like to do when he emerges from his hole February 2nd, we think he would want to get on a plane and head for Orlando. There’s much more to see in Orlando than a shadow, especially if you explore the wilder side of Orlando and take an airboat ride. 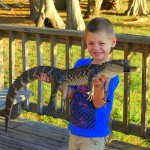 What could Phil see on an airboat ride in Florida? Something everyone wants to see – an alligator. There’s something about seeing an alligator that puts a smile on everyone’s face. You haven’t been to Florida unless you have taken a photo of an alligator, especially a #selfie with a baby alligator. Alligators can grow to more than 14 feet long and weigh over half a ton, according to the Florida Fish and Wildlife Commission.

2) Catch a wood duck in flight

Another animal Phil might see as he pulls away from the Wild Florida dock would be a wood duck. The Florida Fish and Wildlife Conservation Commission says the ducks are native to Lake Cypress or they may be on a first-name basis with Phil, having headed south from Pennsylvania and other parts of the Northeast for winter. 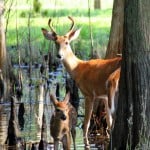 Looking to the skies, Phil has a good chance of seeing a red shouldered hawk. Chances are he is more likely to see the bird in Florida than in the eastern United States, according to the National Audubon Society. 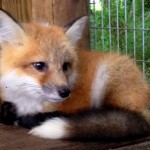 5) Catch a glimpse of raccoon or fox

Navigating through the cypress swamps on an airboat could bring Phil face to face with a raccoon or fox. Visitors from the UK love to see raccoons because they are so rare on the island, but many in Florida consider them a nuisance. Just the opposite is the case in the UK, with foxes being an unwanted animal.

Phil might also be able to identify with another animal on shore with a famous history – the Osceola turkey, also known as the Florida wild turkey. This bird, named for the famous Seminole Indian chief of the early 1800s, is also smaller than its northeastern cousin, according to the National Wild Turkey Federation.

Should Phil not want to take an airboat ride, he could catch a glimpse of all seven animals – Alligators, Wood ducks, Florida white tail deer, Red shouldered hawk, Raccoon, Fox and Osceola Turkey -- on exhibit at the Wild Florida Wildlife Park. The animals are only seven of the more than 100 native and exotic animals on display in the park.