The wildest things our Captains have seen on Orlando airboat rides

The wildest things our Captains have seen on Orlando airboat rides

From wild coyotes to swimming bobcats, there’s no limit to the things you might encounter on an airboat ride. And lucky for you, no two Orlando airboat rides are the same, giving you a unique and memorable experience each time. We sat down with our airboat captains and got to hear some of the craziest things they've seen while on an airboat tour.

“I’ve seen a lot of crazy or wild things out on an airboat, but there are two scenes that really stick out to me. One time, I was out on the water and I just saw this bobcat standing on top of a floating grass mat just looking at me. The other time, I saw a wild coyote that must’ve just finished hunting because his dinner was still in his mouth!" - Captain Marc 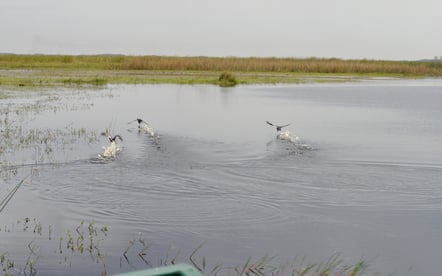 So many people associate Florida with alligators that they often forget about the other animals that call Florida home. Even our airboat captains can occasionally be surprised by Florida's wildlife. And out of the 500 native species in Florida, there are 9 that you can see up close at our Gator and Wildlife Park including: bobcats, racoons, foxes, white tailed deer, opossums, snakes, turkeys, and even otters in our Hawk Swamp!

“May not be the craziest thing to hear, but I robbed a gator of a meal one time. I was riding out and there was a baby fawn swimming out in the water. I thought she was lost so I rode up next to her and put her in my lap, bringing her back to shore. I'm sure it cost some gator a meal, but I thought it was right thing to do in that moment.” - Captain Jeff 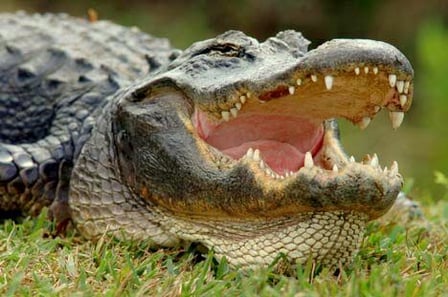 Unlike animals you see at zoos or those that perform in shows, the wildlife you see out in the Everglades doesn't follow a script. Everything you see on an Orlando airboat tour is mother nature's work, where it's predator vs. prey. And while this fawn was lucky that our airboat captain was out on the water, it's very much a gator-eat-gator world. (No, really. An alligator's natural enemy is other alligators.)

“Hands down, I think the craziest thing to happen to me was I saw two bobcats swimming out in the water. And then, suddenly, one of them actually tried to jump in the boat! I felt bad that I couldn't let him on the boat, so I helped point him in the direction of the shore and made sure he got back to land." - Captain John

During most airboat tours in the Orlando area, guests mainly have to worry about not missing the perfect photo, dodging dive bombs from flying birds, and maybe where they parked their car. Now, they might have to add "bobcats in the airboat"! While this might sound like a dream come true to a bobcat enthusiast, you might be unaware of how strong bobcats can be despite their size. So while it may seem mean to not let the bobcat in the airboat, this was the best move to keep everyone on the airboat safe.

Eager to experience your own airboat ride? Book your Orlando airboat tour below, and make sure your camera is charged for all the videos and photos you can take of the wildlife in the headwaters of the Everglades. Who knows... maybe your story will become become just as famous as the legend of the Dead River.