3 differences between an alligator and a crocodile Floridians should know

3 differences between an alligator and a crocodile Floridians should know

Florida is primarily known for three things: its beaches, Disney World, and alligators. From people keeping them as pets to Godzilla's distant cousins teeing off with locals on the golf course, you can find an alligator pretty much anywhere in Florida. But many people who visit Florida are surprised to discover that they aren't the only crocodilian species living in the Sunshine State. For example, southern Florida – in and around the Everglades – is one of the few places on Earth where saltwater crocodiles and alligators can coexist because of the freshwater streams flowing out into the ocean. In this blog, we'll go over three key differences between the two creatures and distinguishing features to help you spot them when you go on an airboat tour in Florida.

Shape of the jaw

If you're lucky (or unlucky) enough to find yourself face to face with a crocodile and an alligator, they might look the same at first glance with their toothy, scary grins and rough, bumpy skin. However, if you look closely at their face, you'll notice that their snouts don't look identical. Unlike alligators, whose snouts are wider and have a u-shaped look, crocodiles have a more pointed, v-shaped snout. While there is not exactly a known reason why their snouts are different, their snout shapes do give them each a particular advantage.

With a wider jaw, alligators are able to get a better grip on bigger, bulkier prey such as turtles or small mammals and bite down with a powerful force. But that's not to say that a crocodile's bite is any less powerful. In fact, the Nile crocodile has been recorded as having the strongest animal bite at over 5,000 psi. Fact like these make us glad we can see them at a safe distance from an airboat ride in Florida. 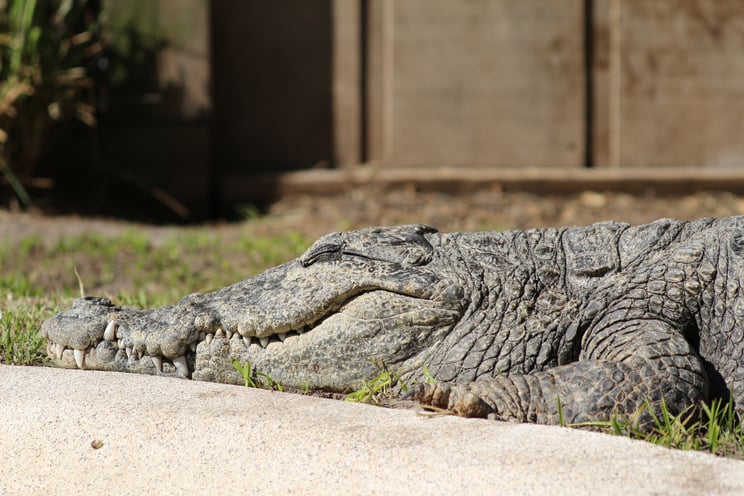 When looking at an alligator and crocodile from the side, you'll notice that only the alligator's top teeth are visible, while the crocodile's teeth seem almost interlaced among one another. This is because of their jaw shape and length. For alligators, because their upper jaw is wider than their lower jaw, when they close their mouths, their lower teeth disappear behind their top teeth. However, for crocodiles, since their upper and lower jaws are about the same width, their lower and upper teeth are able to interlock with one another when their mouths are shut (giving off a pretty scary smile if you ask us!)

Similar to breeds of dogs, different species of crocodilians have different temperaments (just don't expect a crocodile or alligator to come up to you with a wagging tail!). Despite their intimidating looks and what you may hear, alligators are, for the most part, very docile and generally will only attack when provoked. However, while crocodiles may not necessarily run up and attack you, one could say their snapping point (get it?) is a little bit shorter than that of an alligator, and they might be more prone to bite than to run away.

Surprised by what you read? Find out more interesting facts like this by going on a Florida airboat ride or by visiting our Gator Park! Click the link below to start planning your adventure now!