Animals from around the world call the Middle of Nowhere, Florida home. But here at Wild Florida, we’ve also got lots of locals. If you’re a local too, you might’ve seen some of these critters in your backyard. (Or maybe you’ve read an article or two about Floridians finding snakes in their toilets or alligators in their swimming pools.)

Central Florida’s lakes feed directly into the Everglades, the largest subtropical wilderness in the US. A variety of animals live in our wetlands and upland prairies. Meet some of native animals of Florida here!

While we can’t let you swim in our gator pond (although that would be, err, interesting!), we can arrange a personal introduction with some of our animals for you. Remember, if you want to get up close and personal (and check out their digs), be sure to make a reservation.

Most of our native animal exhibits are on the park’s southern perimeter, as pictured in points 9 through 19 on our interactive map. Here are five animals you can meet, or perhaps get reacquainted with if you’ve already encountered one in your backyard! 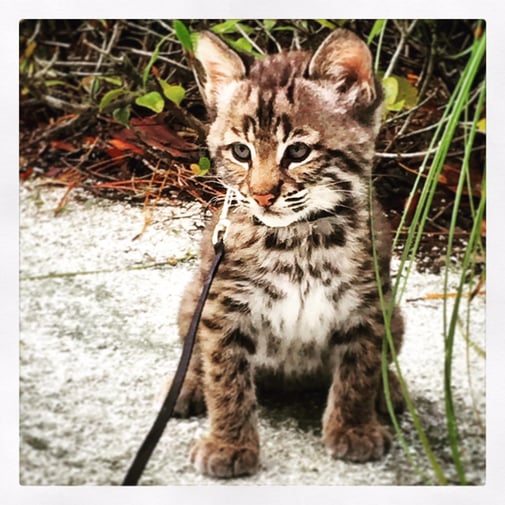 These majestic animals can climb trees and even swim! They target their prey (mostly rabbit and hare) with precision accuracy. Bobcats are medium-sized, typically weighing between 13 and 30 pounds.Duke and Duchess were born at Wild Florida this spring and are among the most popular animals that folks want to see up close. They will eventually breed and become a little more reclusive. Although we work with Duke and Duchess constantly to keep them friendly, now’s the time to come for an encounter.

Red foxThese nocturnal mammals are the largest kind of fox. They adapt quickly to new environments, typically eat small rodents, and sometimes fruits and vegetables, making them ominvores. They are usually distinguished by their red fur, white chests, and dark legs and tails with a white tip.

A little known fact – although these foxes are attractive animals, they stink. Literally! Unlike most mammals, foxes wear their stench on their fur. Some people even say they smell worse than skunks! Raccoons A raccoon usually grows to the size of a small dog. These Florida critters are certainly no stranger to neighborhoods and campgrounds around Florida, where they make buffets out of our trash. They are omnivorous and live anywhere there are trees and food.  Their characteristic black masks and bushy ringed tails make them easy to distinguish. They usually become active in the late afternoon and throughout the night. (Random fact: Our British guests LOVE our racoons!) 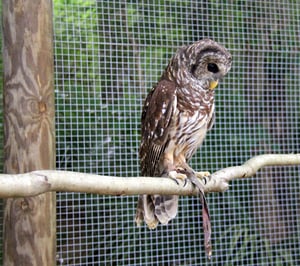 Barred OwlA medium-sized grey-brown owl native to North America, the barred owl's distinct hoot is stirring and magical. Some say it sounds like “Who cooks for you? Who cooks for you all?” It makes its home in mature trees in woodlands and swamps and stalks mostly mice in the night. It flies in silence – literally, its wings make no sound when they flap. Red-shouldered hawkOne of the most beautiful and distinctive raptors in North America, this hawk nests in a variety of woodland habitats. But they are particularly identified with river bottomlands and cypress swamps, just like Hawk Swamp here at Wild Florida. We’re really proud of our Birds of Prey. Both our barred owl and red-shouldered hawk were given to us by the Florida Audubon Society. (No easy adoption, I assure you.) Both birds were wounded and can’t easily fly. Still, they can often be heard communicating with their brethren in Hawk Swamp, which abuts the native animals exhibits. Make sure to take a stroll along the boardwalk through Hawk Swamp and perhaps spot some relatives of the local animals who call Wild Florida home. They may not be considered “exotic”, but they are sure to still delight and amaze!