So... when's really the best time to go on a Florida airboat tour?

So... when's really the best time to go on a Florida airboat tour?

Even if you've never been to Florida, with its nickname being the 'Sunshine state', you can safely assume that Florida is pretty hot most of the time. Despite Florida technically having four seasons, if you ask anyone what they're able to do in the winter you know what they'll say? "The exact same thing we do in during summer!" One of the blessings (or curses depending on who you talk to) of visiting Florida is that the fun never really does stop due to the because of the season. The warmer climate allows people to do things like go to the beach, visit water parks or even go on an airboat ride all year long! With that being said, we get a lot of questions about airboat tours, such as when is the right time to book an Orlando airboat tour. That's why, on this blog, we're breaking down just how the time of year affects what you'll see on your Florida airboat tour. 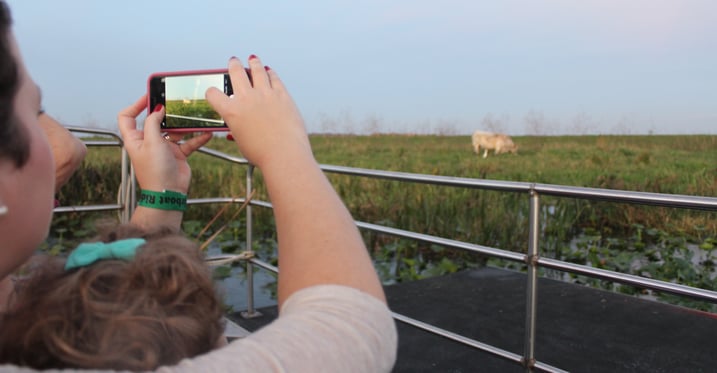 The first thing you need to understand about the Everglades and how the seasons effect it is that the Everglades only have two seasons. Ok, breathe and stick with us for a moment. When you were in school, you should've learned about earth's tilt and its position around the sun are what gives us the four seasons: spring, summer, fall and winter. Or rather, earth's tilt gives every state (with the exception of Hawaii) the four seasons. Since Florida is closer to the equator, our climate tends to be warmer than the rest of country which inhibits us from having the four traditional seasons.

While you could say that the Everglades experiences "spring" and "fall" throughout the year, that's not exactly how we'd classify it. We actually monitor the changing season by the water levels which helps us determine what season the Everglades is in. In a typical year, the Everglades has a period of intense rains known as our wet season and usually lasts from mid-May through November. Then from December to April, we're followed by a period with very little to almost no rain, otherwise known as the dry season. As strange as it may seem, despite how drastic each of these seasons are, life in the Everglades is still able to flourish.

With all this being said, it's important to point out that there really is never an "off" season for the Florida airboat ride industry. So, ignoring airboat tour factors like time and budget for a moment, one of the major things to take into consideration with choosing an airboat tour is, what you want to see? For example, if you tour during the dry season, you'll be able to see birds from all across the U.S. They fly south to Florida to get away from the cold and nest around fresh bodies of waters like ours, Lake Cypress. However, only during the wet season, would you be able to explore the Everglades during the alligator's mating, nesting and hatching season.

Alright... we may have not helped give a clear answer on when you should actually book your Orlando airboat ride, but that's because the real answer is... there is no bad time. So before you change your entire itinerary to fit an airboat ride in, you should consider your budget, whether you want to make your tour an all day or half day excursion, and finally ask yourself, 'What do I want to see?' Only then will you be able to determine what type of tour and time of your tour will work best for you.