If you were a stinker on Valentine’s Day, you may be a lemur in Orlando

If you were a stinker on Valentine’s Day, you may be a lemur in Orlando 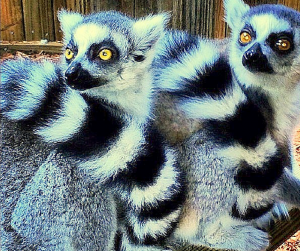 If you forgot to get something for your sweetheart on Valentine’s Day, he or she would probably think you were a real stinker.

You would fit right in with a lemur if February 14th didn’t register on your radar. Lemurs are known for being stinkers too, but not because they are in the dog house for forgetting about Valentine’s Day.

The ring-tailed lemurs use their smell to mark their territory, communicate with each other and as a weapon. 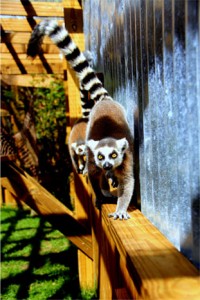 During mating season, the animals will cover their tails with smelly secretions and wave them in the air to determine which animal is more powerful. These face-offs are called stink fights.

Male lemurs also engage in stink fights as a method for resolving conflicts without injury. Typically, the conflicts last only a few minutes, but they have been known to last up to an hour.

While the boys wage a smelly war over who is more powerful, it is the girls who are in charge. Females are the most dominant of the species and they get first dibs on food and selecting a mate.

Although they may not reach for the sun tan lotion, lemurs like to sunbathe in the wild. Groups of lemurs commonly gather in a yoga position facing the sun to warm up in the forests of Madagascar. Scientists believe the animals are warding off the cold of the forest by soaking up the sun’s rays before hunting for food at night.

So, are you now wondering, "where can I see a lemur in Orlando?"

Wild Florida has three ring-tail lemurs -- Lola, Lily, and Lolly. They are about a year and a half old and eat mostly fruits and veggies. They also get a special “monkey biscuit” which gives the animals extra nutrients.

Leo is Wild Florida’s lone Red Ruff lemur, which are the largest of all lemurs. He’s holding out hope for a Valentine, even if you are a stinker.