As the largest native frog in North America, the bullfrog can grow up to a max of 8 inches. Besides their significant size difference compared to most frogs, bullfrogs can be distinguished by their dark, olive-green skin with hind legs that are banded with darker stripes and prominent ridges that extend from their eyes all the way down to their legs. 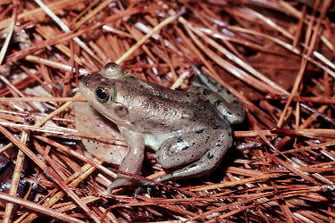 Similar to bullfrogs, pig frogs measure about 3 to 6 inches long and are olive to blackish-brown in color with prominent, scattered dark spots.  In Florida, pig frogs are common around the edges of water, in lakes, ponds, and ditches, or floating in shallow water, being primarily active at night.

Narrowmouth toads are small and plump, with pointed heads and a fold of skin at the back of the head, just behind the eyes.  While they are found in woodlands, ponds, swamps, and marshes, they can also be found in urban and suburban areas, as close as your front lawn!

The double-crested cormorant is the most abundant and widespread cormorant in North America. With their long hooked bills and a long tail, they can easily be spotted along the shores of lakes and rivers or diving in the water for fish near the surface.

Originally from Africa and Asia, the cattle egret reached the USA in 1941 and have now become one of the most abundant herons in North America. They are the most terrestrial heron, often seen along roadsides or near cattle on ranches. 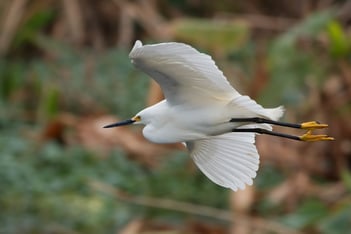 Common in Florida, snowy egrets can be seen foraging in shallow water, searching for small fish or crustaceans. They can be distinguished from similar egrets (like the cattle egret) by their white feathers, black legs and bill, and yellow feet.

Found in many forests, the red-shouldered hawk can be easily seen when flying due to its broad wings and relatively long tail. As sit-and-wait hunters, these hawks can be seen using perches as vantage points from which to dive onto prey.

Formerly called the Louisiana heron, the tricolored heron is a relatively common medium-sized gray heron with yellow legs, and a yellow, black-tipped bill. However, during breeding season, the legs turn pink, the underside of their neck white, and the bill turns blue.

Want to see some of these animals and more for yourself? Click here to book your airboat tour now!

Most active at night, they rest in hollow logs or underground burrows waiting for the cover of night to forage for food. Opossums are found in a variety of forested habitats and survive well in suburban areas where they are often considered pests because of their habits of raiding garbage cans.

The nine-banded armadillo was first observed in Texas in 1849 but was deliberately introduced to Florida in the 1920’s as an opportunistic species that thrives in citrus groves, cattle pastures, fields, gardens, and scrub habitats, only feeding on insects and other invertebrates.

This medium-sized bat has long, glossy, chestnut-brown fur, and broad blackish wings. Roosting in attics, hollow trees, outbuildings, and under bridges, they hunt about 20 minutes after sunset and spend about 90 minutes a night foraging for beetles, moths, and mayflies.

Frequently seen at night, it might be harder to spot them compared to their cousin the red fox, as they only have a few bands of red-orange fur on their sides while the rest of their fur is gray. However, you might be able to spot them in the trees as they are the only member of the canid family that regularly climbs on them.

Although otters always remain in or near the water, they spend their idle time in burrows dug into river banks. Otters are very vocal and have a large repertoire of calls, making it very easy to hear them when you're out fishing or even kayaking on a river or stream.

Located on the islands of the lower Florida Keys (often swimming from one island to the next), they are the smallest subspecies of white-tailed deer in North America and are about the size of a golden retriever.

The alligator snapping turtle is the largest freshwater snapping turtle in the world, weighing 70 to 80 kg with carapace lengths of about 26 inches. Spending most of their life underwater, they lurk at the bottom of lakes, swamps, and slow-moving rivers but can be seen when they resurface for air every 40 to 50 minutes.

Spiny softshell turtles have a round, olive to tan, flattened shell with necks that can almost be as long as their body when extended. Wary of humans, they rarely leave the water and often bask half in and half out of the water so they can quickly escape at the first sign of danger.

Native to the Southeastern USA, they were introduced to Florida as a part of the pet trade and are now well established and breeding in the state. Red-eared sliders get their name because of the way they slide rapidly off logs and rocks when predators approach.

Garter snakes are commonly found in Florida, especially along canals and in marshes and swamps. Their diet mainly consists of aquatic and semi-aquatic prey such as frogs, salamanders, tadpoles, and fish, using their mildly toxic saliva to help subdue their prey.

The yellow rat snake is the most common type of rat snake in Florida and can be easily spotted by its yellowish body colored with four brownish stripes along the body. Despite the name rat snake, these snakes are also known as chicken snakes because they can be found in chicken coops eating eggs.

One of the most common snakes in Florida, the banded water snake, lives in rivers, lakes, ponds, and ditches but can be seen basking in the sun on the shore banks. Often mistaken as the cottonmouth, you can distinguish the two by their behavior. While cottonmouths open their jaws as a threat display, they also twitch their tail, but banded water snakes do neither of these two things. 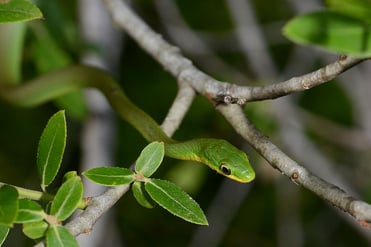 Despite being very common in Florida, people often have a hard time seeing them as their pale green scales and slender body blend seamlessly against the green tree canopies. These snakes are nonaggressive and rarely bite. Even when they are confronted with a predator, they will move a short distance and freeze rather than bite.

Excited to see these beauties for yourself? Book your Orlando airboat tour at the link below to save your seat for an unforgettable ride through the headwaters of the Everglades. Make sure to charge your camera battery so you can capture all these animals and more on your airboat ride, along with walking through our Gator and Wildlife Park!