5 animals you can spot during Orlando airboat tours at night

5 animals you can spot during Orlando airboat tours at night

When people typically think of Florida, they often picture sunny beaches or children getting their pictures taken with princesses. But, Florida's  is something visitors (and locals) are missing out on! And no, we're not talking about the nightlife you find downtown. If you thought the Florida Everglades were wild during the day, you'd be surprised by what you see at night during Orlando airboat tours. Don't believe us? Check out these five wild animals you could spot during Everglades airboat tours at night. 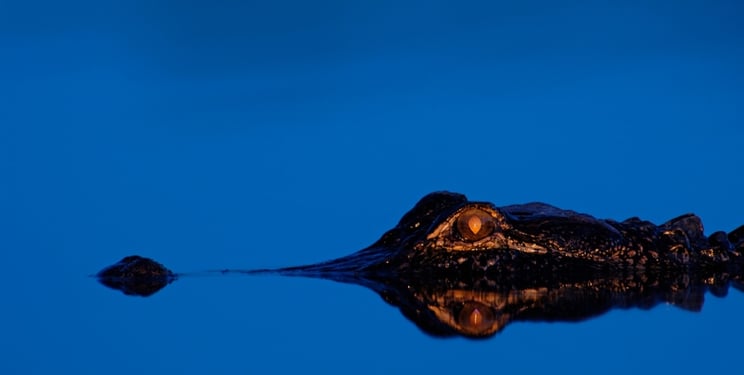 More than 5 million American alligators are living in the southeastern United States, about 1.25 million of them live Florida, meaning... you're bound to run into an alligator (or two). With their scaley, bumpy backs, not only do alligators blend in with the thick marshland, but they virtually disappear once they dip into the brackish water, with the tops of their eyes hard to spot against the lake ripples. However, at night, you can easily spot the alligators on the lake with a light. Like cats, alligators have a tapetum lucidum at the back of each eye. This structure reflects light back into the photoreceptor cells to make the most of low light. For alligators, this makes their eyes glow red when lights are shined on them. A good way to locate alligators and... realize how alone you really are or, aren't.

Often mistaken for a fox or stray dog, you may be lucky enough to spot a coyote during Florida airboat tours at night. While it's not uncommon to spot a coyote during the day, their light brown, textured fur seems to perfectly blend them in against the tall tan grass you frequently find in the Everglades. At night, they might be hard to spot at first; however, if you listen closely, you might be able to hear their howls or yips. Coyotes howl to communicate with their own pack in addition to thwarting off any opposing predators or coyotes. Ideally, by hearing some of their howls, you'll get a general idea of where they are and be able to spot them with a light.

Famous for their iconic red fur, the red fox is another animal you may be able to spot during an Everglades airboat ride at night. While the red fox lives up to the perception of being elusive and quick, if you're shining your light at the rim of a forest or along the fence of a ranch, you may be able to spot them. Red foxes prefer to roam the edges of forests, meadows, agricultural fields  open pastures, avoiding heavily wooded areas often occupied by gray foxes.

Easily distinguished by their "mask," raccoons are one of the most commonly spotted nocturnal animals in Florida next to the opossum and nine-banded armadillo. Commonly throughout Florida, they are found nearly everywhere there are water and shelter. While you can spot them during the day, they are most active at night foraging for food such as, bird eggs, fish, fruit, insects or nuts and seeds. Similar to alligators, with the help of a flashlight, you'll be able to spot their glowing green eyes along the banks of the lake.

While they live in almost every type of habitat in Florida, they are typically found in forest edge habitats. As browsers, their diet typically consists of twigs and leaves, but they can also graze on grass. Using the night's coverage as a natural form of protection, you can often spot them foraging at night. Unlike many of the animals we mentioned previously, usually, when you spot a deer, you can often spot the rest of the herd. White-tailed deer form several kinds of social groups, with the most common being known as matrilineal, which includes a doe, her female offspring of previous years, and their fawns.

With more than 300 different species of wildlife living in Florida, it's safe to say these are just a handful of the animals you'll be able to see during Florida airboat rides at night. On Lake Cypress alone, there are about 80 different species of wildlife, so you're bound to see some of the animals we mentioned in this blog along with a few we didn't. Ready to book your airboat tour? Click the link below to reserve your tour online, so all you have to worry about is remembering to pack a flashlight!