Ending up face-to-face with an alligator in Florida is not super likely, but it could definitely happen. With 1.25 million alligators calling Florida their home, sometimes there’s just no way around it. Many Floridians may know the “tips and tricks” when it comes to what to do when you find yourself in harm’s way, but the same can’t always be said for tourists who visit Central Florida.

At Wild Florida, we LOVE alligators. They're amazing creatures! But we understand that educating our fans and guests is important, too. We’ve decided to debunk a few myths you may have heard over the years… with hopes they’ll come in handy the next time you are in close proximity of a giant-sized Fluffy.

Myth 1: Alligators can't catch you if you run zig-zag


One of the biggest misconceptions people have about alligators is that they will actually chase and hunt humans. Generally, when alligators spot humans, they're likely to swim away (if near water) or avoid confrontation. Alligators are capable of catching people or animals running in a zig-zag pattern, and they're pretty quick, too. So if you run into alligator, and it does happen to chase after you, it's really best to run away, in a straight line because their blindspot happens to be directly in front of their nose! 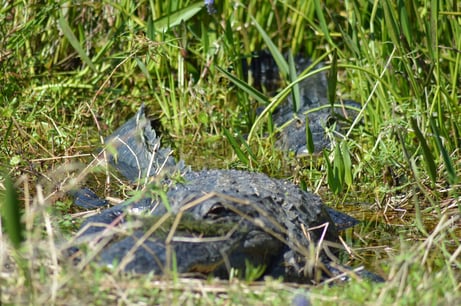 Owning a pet alligator may seem like a cool idea (they're pretty cute when they're little runts!). However, alligators make terrible pets. Unlike a cat or dog, which generally shows affection to the hand that feeds them – this type of affection may never occur with an alligator. And while the idea of having a gator hatchling may not seem so daunting, without the proper equipment or environment, you'll end up with a six-foot or possibly 13-foot gator in your tub or pool! (That would definitely make swimming in the summer a bit awkward.)

Despite what you may think, alligators actually have very good eyesight. With their eyes positioned on the side of their head, they have a fairly wide range of sight. Along with their excellent range, they're able to see and sense movement of potential prey. Within their eye, there is a layer of cells called the tapetum lucidum, located beneath the photoreceptor cells. Often referred to as "eye-shine", the retina is able to reflect light back into these cells, which increases the amount of light detected, improving an alligator's vision in low-light conditions.

While alligators are mainly known for their smile or just weird appearances in places that aren't a lake or river, people often forget that alligators are green, scaly, muscle machines! With their sharp claws and powerful tails, alligators are able to help push their bodies up onto fences. Young alligators are typically more agile climbers, but adults have been known to climb fences to get to water or away from humans.

Myth 5: Alligators have no enemy

While female alligators on average can grow up to 10 feet and males can grow up to 13 feet, it may seem that alligators are at the top of the food chain in the Everglades. However, with the expansion of neighborhoods and other developments, humans are actually an alligator's number one "predator" (along with other alligators themselves). With the destruction of their natural habitat, many alligators become dislocated, entering uncharted waters where they may be hunted by other gators or get caught in man-made constructions. 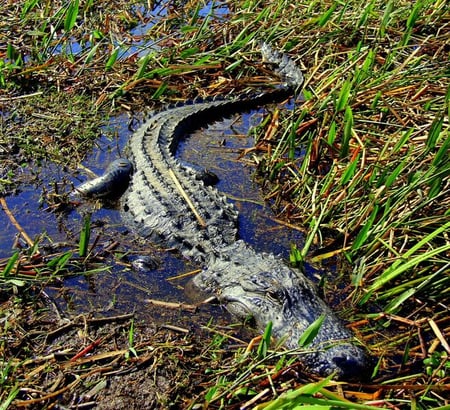 Myth 6: Alligators are unable to naturally regulate their temperatures

See anything we missed or just excited to get up close to a gator yourself? Come visit our gator pond at our Gator and Wildlife Park, or ride an airboat in the Everglades to hear more facts about alligators out in the Everglades from one of our tour guides!