Have you heard sounds similar to a motorcycle or an old car starting while on your last airboat ride at Wild Florida? If so, that’s because it was alligator mating season in the swamp! Mid-April to May is their primary mating season, usually when the water begins to warm. The way alligators communicate and interact during mating season is super interesting and it happens right here in our backyard! Below we’ll share the life cycle of a wild alligator in the Everglades so you can keep your eyes and ears open and hopefully spot a baby gator! 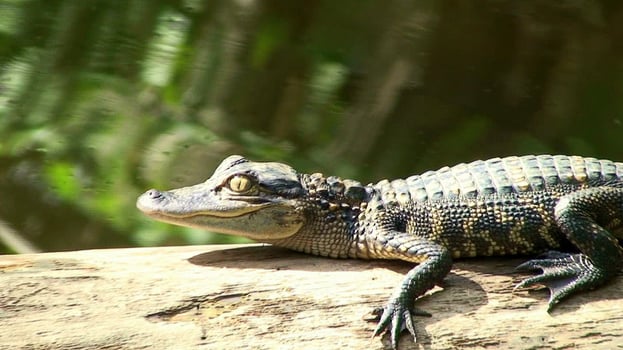 We already shared when mating season begins, but how about the rituals the gators participate in when looking for a mate?

Well to start, did you know male and female alligators reach sexual maturity when they are about 6 feet long? They get to this length at about 6-8 years old. Male gators are also known to fertilize several female gators each season. They begin attracting female alligators and warning off other males by making those sounds similar to a motorcycle we mentioned earlier... these are known as alligator bellow sounds. The bellow is often followed by the gator slapping its head on the water and then holding the upper part of its body above water for up to 30 minutes. Usually once one gator starts these rituals, others join in and it becomes a means of communication for male and female gators. You can tell the difference between a male and female bellow sound by the males’ sub-audible vibration. It’s said to look as if the water is dancing around the torso of the male gator and this is because their bellow is more powerful and louder. Gator mating usually occurs at night and in shallow waters. Signs of mates finding each other are two alligators swimming together, touching each other’s snouts or blowing bubbles… so be on the lookout for these gators hanging out during your next airboat ride!

Following mating season, the mama gator begins preparing for nesting season. A female alligator is usually looking for the perfect location to build her nest around the months of June and July. The water levels help her decide the height of her nest so it won’t get flooded. The mama gator uses her whole body to construct the nest for her new babies. She begins by using her belly and tail to clear the area and her jaw to dig out and pile the materials she’s gathered. The nest can be up to 3 feet tall and 6 feet wide. A nest this big can hold up to 50 eggs, but typically holds about 25.

Incubation lasts for about 65 days, and you can be sure the female alligator stays close to her nest during this time. Female alligators are some of the most caring and protective species of their little ones. They're always on the lookout for predators such as raccoons, birds and other intruders trying to approach their nests. The best time to be on the lookout for baby gators is during hatching season which begins in August and goes through September. Here at Wild Florida, we find it most interesting that the temperature of the nest determines the sex of the hatchlings. You heard that right… the heat of the nest decides the baby gator’s fate. A temperature of 91 degrees Fahrenheit or higher produces males, while a temperature of 86 degrees Fahrenheit produces females, and the temperatures in between is fair game… that means an equal chance of a male or female gator being born.

As incubation is complete, some of the hatchlings begin producing a grunting sound which stimulates the other hatchlings to also grunt. This lets mama know it's time to open the nest, and once the hatchlings break through their shell, help them to the water. The baby gators don't just stay close to mama when they need warmth, they stay with her until they're about 2 years old. And although it takes some time, once the baby gators reach 6 feet, the cycle begins all over again.