Sloth life: It ain't a sin!

Sloth life: It ain't a sin! 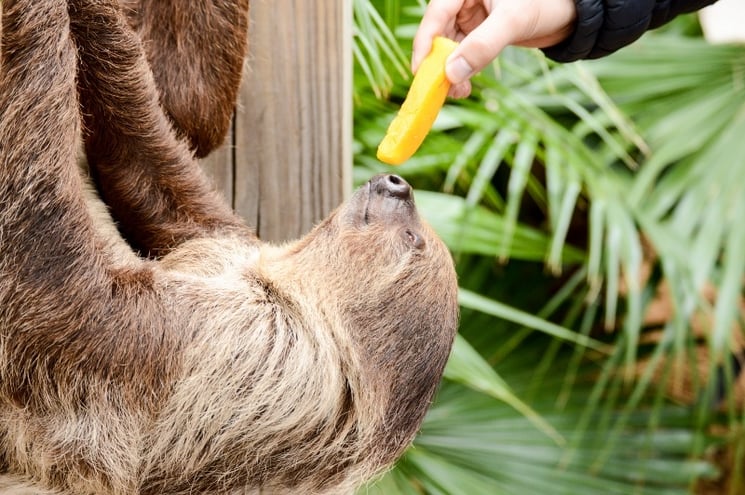 Sloths have a bad rap. It’s probably because they share a name with one of the seven deadly sins! In that context, “sloth” refers to laziness and spiritual or emotional apathy. But the animals themselves are among the most gentle creatures on earth.

The Portuguese apparently named them after the sin in the 16th century. Still, sloths easily could’ve been named for their docile behavior. They are VERY slow creatures indeed, capable of moving about 10 feet per minute, and only slightly faster when faced with a predator. And truth be told, sloths really don’t do much all day.

These medium-sized mammals are native to the jungles of South and Central America and resemble monkeys, although they're more closely related to the anteater. Wild Florida is home to three, two-toed sloths: Guy, Ana, and their baby George, who was born this past spring here at our Wildlife Park in the Middle of Nowhere, FL. The sub-tropical climate in Central Florida is similar to their native habitat, which helped in the often-difficult breeding process. But more on our sloth family in a minute.

Sloths really only move when necessary. They live in trees, and typically spend their entire existence moving between two or three trees at the most. It’s no wonder they’re slow and stationary. They have about a quarter as much muscle tissue as other animals of similar weight. Their best defense from natural predators is staying above ground.

Sloths come down from their trees about once a week to urinate and defecate. (Talk about holding it!) But seriously, their body function seems in sync with their movements, which is VERY, VERY SLOW. Some sloths are breeding grounds for insects, and others are known for the algae that grows in their fur, which can also be a defense mechanism.

Sloths also spend about 16-18 hours a day sleeping. They have huge four-chambered stomach that make up 20-30 percent of their total body weight. (Again, no wonder they’re slow.) Guy, Ana, and George love to eat mangos, cucumbers, and corn! We try to get them to eat our vitamin-packed “monkey biscuits", but they seem to prefer fresh fruits and vegetables.

The family here at Wild Florida is a little more active than their jungle brethren. Guy, Ana, and George get a lot of visitors every day. But even then, they don’t really pay attention to humans. When we take folks into their habitat for a feeding, they usually don’t even make eye contact. Because they can rotate their necks 270 degrees, you’re more likely to see them turn their heads than move their lanky bodies. But they mostly just sloth it up all day long and watch the world go by.

We were so excited to welcome George into the world last year. Not only because we love to see our animal family grow, but also because it can be difficult to breed sloths in captivity. 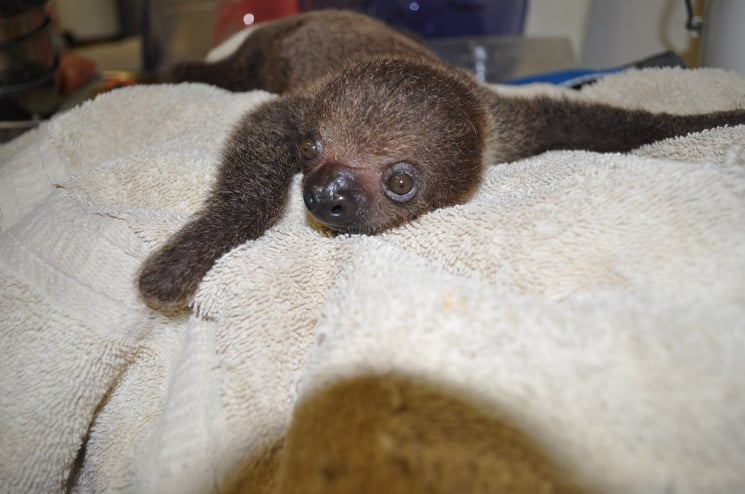 We weren't 100% positive Ana was pregnant. Our animal keepers joked about her having a baby bump for about a year (the typical gestation time for sloths) until one day when we saw she had actually given birth! We were shocked, but our team was right there to help make sure newborn and mom were happy and healthy.

Now (whether we like it or not) George is fully grown and in his own enclosure while his two proud parents live in their own enclosures as well. But he'll soon have more friends living with him as we obtained some more sloth friends for him to hang out with!

It goes to show you sloth life isn't quite as sedentary as it may appear. They make time for family, and that’s anything but sinful in our book!