Why are we so fascinated by the lizards roaming around Wild Florida?

Why are we so fascinated by the lizards roaming around Wild Florida?

Our American Alligators definitely steal the show here at Wild Florida, but we have some very tiny friends that get some unexpected attention, too. 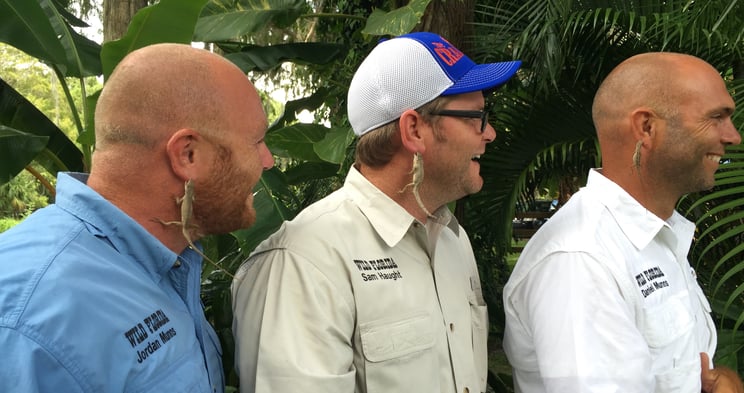 The green anole, better known as a chameleon lizard here in Florida, can be found all over our Gator and Wildlife Park… actually they most likely can be found roaming anywhere around our state. These little guys are one of Florida’s only true native lizards. They’re generally about 5 to 8 inches long and can be spotted by its dew lap. A dew lap is attached to the throat and can be identified by revealing a brightly colored patch of skin and is usually pretty scary looking. Baby green anoles are usually the cutest because they don’t have a developed dew lap yet or maybe just because they’re easiest to catch and hold!

They get their chameleon name from their ability to change color from bright green to dark brown. You may also spot brown anoles here in Florida which originally came from Cuba and the Bahamas. It’s believed the brown anole has invaded and out-numbered the green anole… although here at Wild Florida you’ll spot hundreds of the colorful little guys. They’re usually hiding on trees in the Gator and Wildlife Park or on the dock when waiting to go on an airboat ride. Sometimes you'll even see some of our animals chasing them.

Lizards hang around Florida because of our moderate climate and population of insects, which means tons of food for them. Florida locals are fascinated by lizards due to their ability to keep small insects and spiders out of 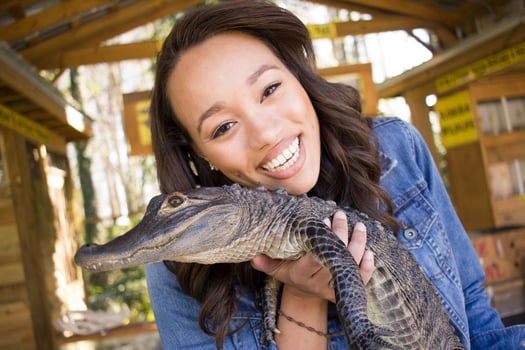 the house. They act as a natural, free pest control… score! But our visitors from around the world have the best answer as to why they’re fascinated by the green anole. Some visitors refer to lizards as baby alligators... we're sure Fluffy wouldn't like sharing that title! Here at Wild Florida we think it’s the coolest nickname but we know there’s no way it can be true. It definitely explains why guests jump and scream when walking around the park… some of them are more scared of these little creatures than they are of the big guys swimming around the swamp.

Our staff has some funny stories as to why they're mesmerized by lizards... many of them remember when growing up that they would run around and snag them! They would make sure to catch them carefully so they didn't get hurt them. One staff member even recalls allowing the baby lizards to bite onto his ear lobes to look like lizard earrings. Yup, you heard that right... sounds weird, doesn't it? But he claims it doesn't hurt his ears or the lizards. Definitely not a fashion trend we'll be following or advising our visitors to do, but a story worth telling.

So next time you go on an Orlando airboat ride, keep your eyes open for the infamous baby alligators on the deck or make sure you see an exotic animal show where you'll get the chance to meet and hold Fluffy!