Animals that want to snuggle at Wild Florida

Animals that want to snuggle at Wild Florida 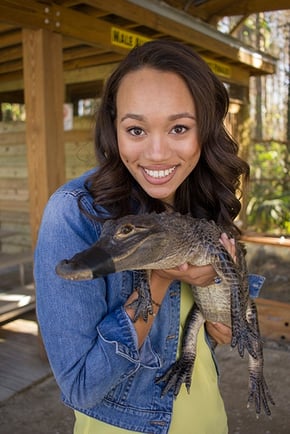 There are a handful of animal parks in Florida, but few let you hold some of the animals, let alone explore their habitats!

We have over 200 species of animals at our place and some of them allow visitors to hold them — even sneak a cuddle or two. You probably won't want to cuddle with an alligator or a watusi, though. But who are we to judge if you do? We are Wild Florida, after all.

Our fans show the most enthusiasm for our babies. We don't know what's in the air around here, but we’ve recently experienced a cuteness explosion, adding baby lemurs, a sloth, a deer, and a bobcat to our Wildlife Park.

If you're an animal fan, you may be wondering: Where can I get up close and personal with animals in Orlando?

At Wild Florida, of course!

Many of our visitors have taken photos with Fluffy, our alligator who travels the globe to help share our story. We also have 10 other animals you can interact with in our Petting Zoo and Animal Show. So bring your selfie sticks and let's talk about which animals you can put your paws on:

Grab your tickets to our Wildlife Park and check out how you can hold and pet our animals at Wild Florida!