Rain was born in June and is almost fully grown already. She’s nearly the spitting image of her mom Lucy, who came to live at Wild Florida in February. 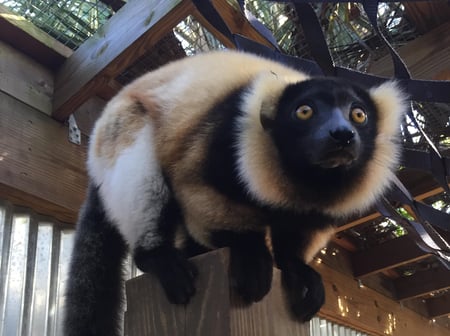 We introduced Lucy to Leo, our other red-ruffed lemur, and the two began getting to know one another and establishing their household. Female lemurs are dominant, and so from the beginning Lucy asserted her power over Leo. Unless Lucy wants to play, groom, or even allow him near her, Leo keeps a respectful distance.

Just a few months after we put them together, Lucy gave birth to Rain in a corner of their enclosure. Because Leo is not the father and Lucy needed to rest and nest, we gave mama and baby their own space in a private enclosure.

But just last month Rain stopped nursing and we reunited her and Lucy with Leo. They say two’s company, but three’s a crowd. In this case you might say it’s a “conspiracy”! (That’s actually what a group of lemurs is called.)

The red-ruffed is one of the largest of the 100 species of lemurs, 90 of which are nearing extinction. The lemur is one of the most endangered animals in the world. The rain forests in their native Madagascar – an island nation off the southeast coast of Africa – are disappearing so fast that lemur populations are being decimated. It’s one of the reasons we participated in the World Lemur Festival just a few months ago. 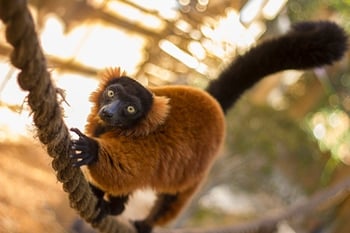 With these animals dying off so rapidly in the wild, we’re honored to be a place where they can flourish. Here at Wild Florida, we’ve been blessed with several births this past year, including a sloth and a deer. Two words: Too. Cute.

Again, Rain is almost full grown now and bares the same white markings as her mother. Leo, on the other hand, has the classic red fur. But again, because females are dominant, Leo is also usually the most passive among the three. But that’s a relative term when it comes to lemurs, who communicate in loud (sometimes high-pitched) yells, grunts, and calls. The cacophony can sound a little aggressive, but it’s just the way they talk. It can be a real show! When Leo, Lucy, and Rain communicate with our ring-tailed lemurs, Luke, Lolly, Lilly, and Lola (who live in an enclosure right next door), it gets really LOUD!

And little Rain is just as loud as the others. When she’s not hollering, she plays with her mom and Leo, including grooming them and being groomed. Their claws are especially made for this, and they even have a grooming tooth that helps them keep their fur clean and well-maintained.

Rain is still finding her way in the world, testing the limits of her mom, the head of household, and growing every day. Come say hi at our Wildlife Park and see this little lemur in action.